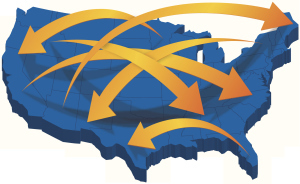 When it comes to its impact on the world of work, Covid-19 will be remembered mostly for the things it slowed down. But in certain areas, the pandemic has been an agent of rapid acceleration –  and it’s in the war for talent where we see arguably the greatest upshift.

Resource demand is spiking, particularly across the contingent workforce, as skills shortages and sudden surges in business activity accelerate the need to scale up resources. However, this resourcing challenge is also being exacerbated by an exodus of talent from major cities.

A recent analysis of the US Postal Service’s changes in permanent address data shows high levels of relocation in the last year. The trend appears to be away from big cities such as New York, San Francisco and Boston to other locations with lower living costs. According to the analysis of these moves, smaller metropolitan and vacation areas are proving more appealing, with Idaho, Colorado Springs and the Grand Strand of South Carolina seeing an increase in people relocating to these destinations. New Jersey also appears to be desirable for many leaving New York, with the number of people moving into the suburban counties up 76% between 2019 and 2020.

Relocations between counties were up 7% last year when compared to 2019, with the tail end of 2020 the most popular time for people to make a permanent move.

At Guidant Global, we’ve analyzed multiple reports and data sets to see where people are relocating to and from. Our findings support the idea of previously popular cities losing talent to other locations. As a case in point, some of the data we’ve seen suggests that for every two workers New York gains from LA, it loses three others, while it is also losing two people for every new citizen to the Miami-Fort Lauderdale area. Other popular destinations attracting New York’s elite professionals include Greater Philadelphia and Greater Boston.

In Chicago, every worker the city gains from the Denver Metropolitan area is offset by the loss of two others. Figures for Dallas-Fort Worth Metroplex showed a similar rate of talent loss. Other popular destinations attracting Chicago’s elite professionals include Los Angeles and the San Francisco Bay Area.

When we combine all of the available insight, one thing becomes incredibly clear: our people are not where they used to be. After a year of remote working, the traditional hubs of talent attraction, such as New York and Chicago, have lost their appeal for many professionals. For those displaced by the pandemic, a move to a more affordable location has been a necessity rather than a choice.

And while there are varying reports of where people are moving to and which cities are now most popular, the simple fact is this: no firm and no staffing company can assume they will find the talent they need in any given location.

Instead, for those able to deliver work virtually, talent attraction teams will need to broaden the scope of their strategies. A focus on a particular county is no longer necessary for some – a positive outcome for those facing particular skills shortages. This is significant for a few reasons.

Organizations that require on-site contingent and permanent workers will see the biggest impact of this great talent exodus. For some, a campaign to re-engage those displaced by the pandemic is already underway. On a longer-term basis, work will be needed to attract and encourage people back to areas where on-site workforce demand is rising. But perhaps most importantly, this combination of talent moves and competition for resources has made it more critical than ever to get true value from workforce supply chains.

Now is the time to rethink resource strategies and utilize external, cross-county experts to engage with workers you haven’t interacted with before. Tough times are still ahead, but we have reached an exciting and pivotal moment where the future of work will be shaped by what employers and talent attraction managers decide to do next.