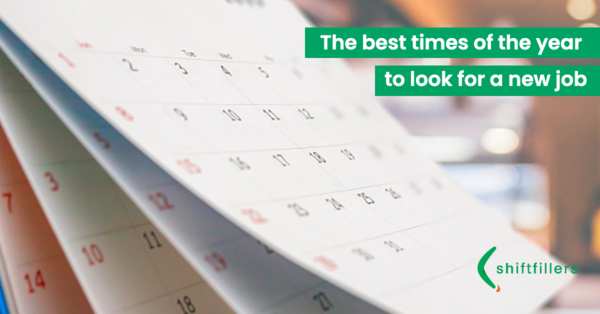 Timing can be crucial when it comes to looking for a new career opportunity. Candidates often wonder if there is a best time of the year to get a new job. The short answer is: it depends.

There are certainly some peak hiring seasons, and what we'll share with you here is a breakdown of common hiring patterns we observe throughout the year. But don't overthink it! Keep in mind that it's always good to consistently search and apply for jobs, regardless of the time of the year. This data will only help you understand when you could expect a boost in openings, and therefore, when you can maximize your search efforts. It's also important to consider that hiring seasonality can also vary by industry, the type of job you're looking for and even the region where you live.

When is the best time to look for a job:

The beginning of the year is a great time for getting hired in most industries. It's a fresh start for companies, they receive their budgets, forecasts and have a better idea of what they need for the year. Expect the first two weeks of January to be slow, as people are still coming back from vacation and taking a few weeks to reorganize their workflow. Another thing to expect is higher competition: a lot of people tend to look for a new job during this time of the year - many have this on their New Year's resolutions!

The hiring peak from the start of the year keeps its momentum and there are still plenty of opportunities to line up some interviews. There is also a pre-summer push for companies to recruit for talent and they generally want to fill positions before vacations, meaning there is a sense of urgency in May.

The summer months are usually slower. Managers are more likely to take time off, and most companies spend their hiring budget before the summer hits. But don't let this discourage you! If a job is advertised during summer, it's likely an urgent position to fill. And, in opposition to January and February, you'll probably deal with less competition as there are fewer applicants during the summer months. Never stop your job search completely!

September and October: Just as hot as your pumpkin spice latte

Fall is one of the best seasons to find a new job. Similar to what happens in January, September is a time for renewal. As people return from vacation, work resumes to business as usual. There's also more pressure to fill positions. If there are open vacancies since the summer, they need to be filled as soon as possible. If there are positions that need to be closed before the end of the year, recruiters need to work on that urgently as well.

November and December: Winter and holidays are coming

This is a season that highly depends on the type of job you're looking for. Unless you're looking for a temp or seasonal job, the beginning of winter tends to have fewer job opportunities. People are looking ahead to Thanksgiving and their Christmas holidays, usually struggling with their end-of-the-year-tasks, and you may take longer to hear back from an employer. However, as we said before, there are many companies looking for temps at this time of the year - especially those in retail, warehousing and logistics.

Here at Shiftfillers, we hire all year round, including those slower months! Keep an eye on our available opportunities, our hiring process usually takes less than a week.

Aurora_IL Staffing Contracts Feb Aurora Illinois United States Aurora, Illinois, United States
Join Shiftfillers and become part of the dedicated team that gets products and orders ready for our client’s customers. You will be responsible for accurately preparing and packing ingredients for at-home recipe meal kits. If you like a fast-paced...

Fontana_CA Staffing Contracts MN339285331Feb Fontana California United States Fontana, California, United States
Join Shiftfillers and become part of the dedicated team that gets products and orders ready for our client’s customers. You will be processing, preparing, picking, packing and shipping customer orders. If you like a fast-paced, physical position t...

Fontana_CA Staffing Contracts RR830352218Feb Fontana California United States Fontana, California, United States
Join Shiftfillers and become part of the dedicated team that gets products and orders ready for our client’s customers. You will be processing, preparing, picking, packing and shipping customer orders. If you like a fast-paced, physical position t...